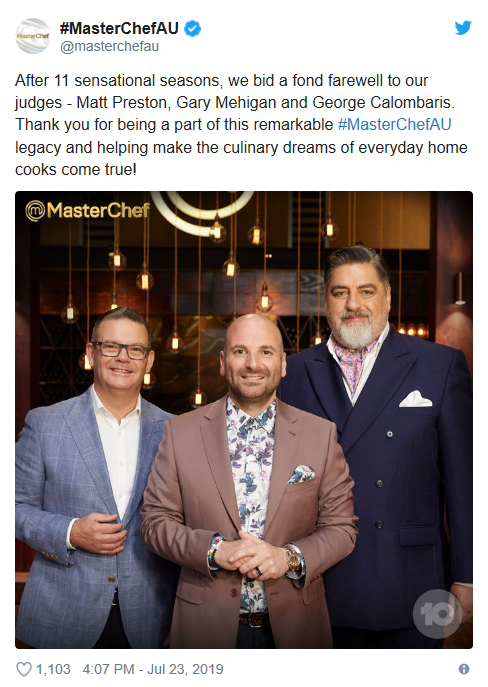 The heat from the MasterChef kitchen rose to an all-time high with the unexpected exit of all three judges Matt Preston, Gary Mehigan and George Calombaris. The Network 10 program announced on its official Twitter page last Tuesday 23 July, premature to Season 11’s grand finale, the trio would not be returning as judges for Season 12. The announcement left the judges and viewers shocked and confused as to how this came to play.

Over the coming days, news unfolded that the unexplained departure was caused by an inability for Network 10 and the celebrity chef trio to come to an agreement on contracts after months of negotiation. With tensions still looming around George Calombaris’ staff payment dispute through his hospitality business, Made Establishment, many concluded that this was the final chop irrespective of Network 10 CEO, Paul Anderson putting the rumours at bay.

With so much at stake, as previously rated the most-watched TV program across Australia, the question remains whether Network 10 shot themselves in the foot with this shock announcement. From a Public Relations standpoint, the decision felt rushed and lacked strategic planning, coupled with the sensitive timing of allegations made against Calombaris.

Here’s what we can learn from the PR mishap involving MasterChef:

There is nothing more damaging to a company’s reputation than a disgruntled staff member coming forward to the media explaining to the nation that the company failed to communicate. The first step of demonstrating a successful reputation externally is having a solid internal communications strategy in place. In the case of Network 10, notifying the trio prior to the public announcement would have avoided the incident of Matt Preston coming forward on ABC Melbourne’s radio detailing his understanding of the decision coming from MasterChef’s Twitter announcement.

Dropping the fiery announcement of new judges after 11 years, hours before the 2019 grand finale was perhaps not an ideal situation considering the importance of viewer ratings for television. In result, the Season 11 grand finale ratings slipped by 612,000 viewers from last year’s Season 10 grand finale. When it comes to major changes in a business, no time may be perfect but taking advantage of the most ideal time is crucial.

The Network 10 announcement was a pivotal moment for MasterChef with the judges having hosted the show since its inception in 2009. When it comes to business milestones, taking the time to create a strategic plan before making major announcements can either make or break your organisation’s reputation. Key messaging, spokespeople, use of platforms and timing all need to be considered with the environment your organisation is in both internally and externally.

For MasterChef, playing on the exciting unknown of “Who will be the next judges?” is something the program executed successfully. Whilst many media outlets reflected on the decision negatively, the guessing game of who will be fresh meat was an undertone in many discussions across news panels and social media dialogue. It is crucial to understand your audience and develop messaging to not only flag changes, but build hype for your audience to eagerly anticipate the next chapter of your company.

If you would like to know more about KDPR’s crisis communication and strategic planning services, please get in touch with us today via (07) 3136 2555 or .